Angela Psenicska, senior consultant/archivist, joined the QAI family in December of 1994. Ever since, she has had nothing but a rewarding experience.

“During my 20 years at QAI I had the opportunity to travel extensively throughout the U.S. I visited many places across the U.S. that I would not have otherwise had the chance to,” Angela said.

As a senior consultant for QAI’s Quality Assurance (QA) Division, Angela conducts audits, establishes new programs, and facilitates Good Laboratory Practice (GLP) and Good Clinical Practice (GCP) compliance training for pharmaceutical and agricultural firms. In addition to her role in the QA division, Angela is the archivist for the GLP archives. There, she is responsible for all aspects of the archival process and maintains the GLP archives for more than 30 clients.

Prior to QAI, Angela conducted research on chemical warfare agents for the U.S. Army Medical Research Institute of Chemical Defense (USAMRICD). No stranger to QA, Angela has also worked as a QA auditor at Biospherics, Inc., and AMVAX. Angela earned a Bachelor of Science in Biology from the University of Maryland, Baltimore County.

In keeping with QAI’s reputation as a familyoriented business, Angela has three daughters, one who also works for QAI’s Information Systems Division (ISD). In her free time, Angela enjoys running, hiking and tennis.

For Dan Carey, no two days at QAI are ever the same. As a senior consultant/archivist for QAI’s Quality Assurance (QA) Division, Dan may spend one day in a farm field, another at a wood treatment plant, and another in a clients’ laboratory. On occasion, he even travels internationally, and has made trips to Europe and Chile over the course of his 18 years at QAI.

“I like the variety of work,” Dan said. “It’s nice not being in an office every day.”

In his position, Dan specializes in supporting clients who are working under the Environmental Protection Agency (EPA) and Food & Drug Administration (FDA) Good Laboratory Practices (GLPs). He performs in-phase audits—which require examining clients’ procedures during their study in a farm field or laboratory—as well as performing report audits to verify the report to the study data. Dan also writes standard operating procedures (SOPs), serves as an archivist, and is the radiation safety officer for receipt of radioactive materials.

Prior to QAI, Dan worked as the laboratory manager for Biospherics, Inc. There, he oversaw the laboratory’s analysis of commodities, soils and water for pesticide residues, in addition to the analysis related to hazardous waste disposal and superfund site cleanup.

Outside of work and his busy travel schedule, Dan spends time with his wife and three children, runs marathons and volunteers with his kids’ local swim club. 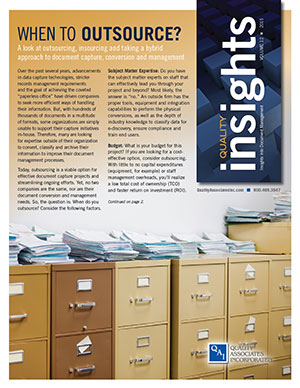