DocPoint Solutions recently came out with a press release stating that it has developed a reputation as Nintex’s number one partner in the federal space. DocPoint is a systems integrator focused on developing IIM solutions on top of Microsoft’s SharePoint platform. Nintex is an ISV that specializes in workflow for SharePoint. But DocPoint President Scott Swidersky stressed that while Nintex is a strong ISV partner for DocPoint, his organization’s business is really centered on professional services.

“That’s one of the main differences between what we do at DocPoint and what a traditional IIM VAR does,” Swidersky told DIR. “Traditionally, VARs have had a very product centric approach. They have represented an ISV and tried to solve their customers’ problems with that ISV’s products. “That’s not the case with SharePoint at all. We don’t sell it. Microsoft does. We go in and help customers configure SharePoint to try to solve whatever problems they are trying to solve.” DocPoint was launched five years ago as a subsidiary of imaging-focused SI and service bureau Quality Associates, Inc. (QAI). The two companies share an office in Fulton, MD, and both have had significant success in the federal government market. Swidersky estimates that half of DocPoint’s sales come in the public sector. “A lot of DocPoint’s success has involved repurposing what we learned from going to market with QAI,” he acknowledged. “This includes understanding the contract vehicles that enable us to go to market successfully in the public sector.”

In a DocPoint press release, Jakob Maciolek, Nintex’s regional sales manager for the Americas, is quoted as saying “DocPoint is a premier systems integrator in the Mid-Atlantic area, and we consider DocPoint a ‘go-to’ partner when it comes to implementing enterprise-class IIM solutions. In particular, DocPoint’s experience working in the federal space is exceptional. In fact, DocPoint is the only provider of Nintex products on GSA Schedule 70 (Contract GS-35F-0654W) at present.”

Swidersky noted that DocPoint’s strategy of building an ecosystem of partners whose technology is complementary to SharePoint is also something that carried over from QAI. QAI has partners like Kofax, Kodak, NSi, and Open Text. “Nintex is DocPoint’s leading ISV partner,” he said. “We also work closely with AvePoint for capabilities in areas like governance and migrations, and KnowledgeLake for some imaging-specific functionality.”

And while DocPoint remains focused on IIM solutions, it has also diversified into other areas of SharePoint implementation. “The reality is that we can’t afford not to branch out,” he said. “The same customer that hires us to set up an invoice processing application might also have interest in deploying Microsoft’s Project Server or utilizing some of the business intelligence capabilities in SharePoint.”

According to Swidersky, DocPoint’s goal is to drive 70% of its revenue through professional services and 30% through the sale of third-party software. “As a whole, DocPoint grew 150% in 2012,” he said. “For 2013, our expectations are to grow product revenue by 20% and services revenue by 100%.”

DocPoint is ramping up its hiring to handle this growth. “We will always need a combination of contractors and full-time employees,” said Swidersky. “But, as the nature of our engagements becomes more long-term, and our customers build up a dependency on our services, we see an increasing need for more full-time employees.” 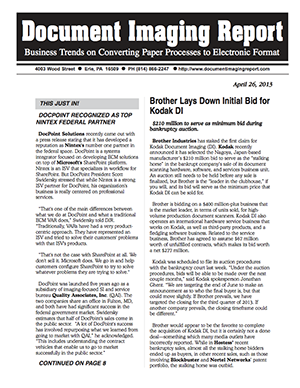