We’ve spilled a lot of (virtual) ink in DIR discussing how SharePoint is affecting the IIM industry. Overall, our conclusions have been a mixed bag. On one hand, we are certainly seeing increasing adoption of the Microsoft platform for IIM applications. On the other hand, this adoption hasn’t seemed to have had a negative effect on many imaging-centric IIM ISVs.

The main reason for this, in our opinion, is that while SharePoint can certainly be utilized for imaging applications, if you want to use it as a repository for mission critical processes, SharePoint typically requires considerable customization, including third-party ISV add-ons. Often, it’s simpler, and probably less expensive, to just install an out-of-the-box document imaging system and be done with it.

That said, there are certainly plenty of successful document imaging implementations with SharePoint as the repository. KnowledgeLake has built a thriving ISV business image-enabling SharePoint (dating back to SharePoint 2007). Kofax claims to have hundreds of capture installations where SharePoint is the back end and recently put its money where its mouth is by acquiring a BPM ISV to complement its scan-to-SharePoint focus [see DIR 11/16/11].

What QAI did differently from most of its counterparts was create a SharePoint-focused subsidiary—DocPoint, which is projected to reach more than $9 million in sales for 2012. Being solely focused on SharePoint has enabled DocPoint to make the necessary adjustments for success in a market that, when you come down to it, is quite different than the traditional document imaging space.

“With traditional document imaging sales, you go in with a laptop and a demo and hope the customer will buy into what you are selling,” said Scott Swidersky, president of DocPoint and executive director for the Information Systems Division at QAI. “In contrast, most of our DocPoint customers already own the heart of the technology we are going to be working with. They typically have an enterprise agreement with Microsoft that includes SharePoint. We certainly have some third-party brands that we bring in to complete a solution, but, for the most part, we’re talking to our customers about improving their business processes.

“When we introduce a product like Nintex for workflow, for example, we’re talking about selling a piece of software from a $20 million ISV to someone like the U.S. State Department. In the grand scheme of things, that product brand really doesn’t mean anything to customers. The State Department just wants to know that we’re going to be able to solve its workflow problem. Fortunately, we’ve built up enough trust, especially within the federal government market, through some of our past performances (which includes work done by QAI), that they have faith we understand their processes and can get the work done.”

QAI’s assistance has certainly enabled DocPoint to hit the ground running, especially with the National Institutes of Health (NIH), which recently signed a “second consecutive” five-year contract with QAI “to provision a broad scope of document scanning, conversion, and intelligent information management related services.” As part of the $18 million contract, “DocPoint will spearhead the design and installation of a comprehensive end-to-end SharePoint IIM.”

Swidersky noted that when selling IIM solutions built on SharePoint, there are two areas that must be addressed. “First we have to explain how the SharePoint solution is going to save the customer money,” he said. “Related to that, we have to explain why SharePoint will be more cost effective than their current IIM system, which they are likely paying a fortune to maintain.”

Transitioning to a services-led model

Part of this approach has meant revamping DocPoint’s personnel structure. Swidersky introduced DIR to Martin Hardy, who was recently brought onboard as DocPoint’s director, technology and solutions. Hardy is a former DocPoint customer, and he has helped reshape the company into the type of solutions provider he would have liked to work with.

“This is kind of like airing your dirty laundry in public,” said Hardy, “but two-and-a-half years ago, when I was service manager at Maxim Healthcare, we did business with DocPoint, and I saw some of its shortcomings. For example, after we engaged with DocPoint, we provided a list of requirements for a SharePoint project, but we didn’t hear back for six weeks. Suddenly, we received a list of deliverables and it was like, ‘Here you go.’ DocPoint’s lack of communication was disappointing.

“Now that I’ve joined the company, I have an understanding of where DocPoint was at the time. Basically, it was short on personnel. The developer was also the business analyst, the project manager was a trainer and a bit of a business analyst and a bit of an engineer… every significant person had a mix of roles.”

Hardy has been busy re-organizing and hiring new staff. At the top now is a technical lead. “He knows just about every project that is going on,” said Hardy. “He also has to understand SharePoint, as well as be the guru for all the third-party add-ons we work with.

“We’ve also recently hired a senior SharePoint architect to split some of the technical lead duties. This increases our bandwidth, and we don’t have a single point of failure—which protects us if our technical lead should win the lottery tomorrow. Plus, as we grow, we can’t expect a single person to continue to be an expert on everything.”

Beneath the technical leads are project managers, business analysts, and consultants. To fill these roles, DocPoint, which currently employs 11 people as technical staff, utilizes a combination of full-time employees and contractors. “We are looking for employees that can cover three main areas,” said Hardy. “Those are SharePoint administration, which involves setting up and maintaining a SharePoint infrastructure; SharePoint development; and SharePoint support, which involves providing training and doing lower-level administrative tasks.”

Hardy indicated that DocPoint would like to reach the point where its technical workforce is made up of at least 80% full-time employees (it’s currently at about 50%). “That’s not just for financial reasons, even though you typically make a larger profit by deploying your own employees vs. contractors,” said Hardy. “There are other factors like employees being more flexible in regards to overtime because of contractors often being double- or triple-booked with jobs.

“Having more full-time employees will also help us develop experienced teams, on which each employee know his or her role. As we move into bigger projects, it will be important to place teams that can hit the ground running. It’s a big difference to see a team that has worked together in the past vs. a team that is just meeting the first day of a deployment.”

According to Hardy, DocPoint is currently engaged in 11 projects. “These range from simple, once-aweek engagements where we are basically making sure a system is working, to full-blown deployments of a team including a business analyst and a project manager, working 40 hours per week at a customer site. These latter are the types of larger engagements we’d like to focus on in the future.

“Although we will continue to provide them with quotes, doing work for companies with 10-20 employees is really not our sweet spot. We’d prefer to work with organizations that have large server farms.”

To increase the size of its potential market, DocPoint has expanded outside its historical focus of document image management. “We have been doing work with Microsoft Project Server,” for example. “Project Server is software that enables organizations to manage hundreds of projects in one system. It helps users optimally deploy their resources. We are working with a customer that has a very static implementation of Project Server, and we are improving their change processes and also discussing integration with SharePoint for governance.

“Project Server 2010 is fully integrated with SharePoint 2010, which has helped open some doors for us. Microsoft is also doing more to integrate SharePoint with its CRM technology. As Microsoft continues to extend SharePoint to integrate with its other technologies, it has obvious benefits for us.

“We have expanded from IIM into areas like Project Server, CRM, and intranet development and will be revamping our Web site to reflect that. The site currently does a great job explaining our expertise in scanning and IIM, but we now do more than that.”

Hardy sees the opportunities for SharePoint systems integration work continuing to grow. “If you look at some of the plans for SharePoint 2013, Microsoft wants to expand its use to include Internet sites, as well as intranets,” he said. “Up to this point, SharePoint’s use for Internet sites has been limited by its pricing, which is based on users. They are looking at putting some different models in place.

“One of SharePoint’s strengths is its versatility. For a very reasonable licensing fee, users can use it for IIM, intranet, and even Internet projects. It might not be the best-of-breed for any one of these, but it does all three well. Often times, after users get a taste of SharePoint in one area, they’ll expand into another application. That’s why it’s very important, as a systems integrator, that we do our first job well.”

DocPoint works with several third-party software products to flesh out its solutions. These include Psigen for capture, Vizit for viewing, AvePoint for administration and back-up and recovery, Bamboo Solutions for a variety of Web Parts, and KnowledgeLake for document imaging and management. Recently, DocPoint was nominated as a finalist for the Nintex Marketing Impact award.

“Nintex is one of the tools we can bring to bear, but if someone has another workflow in place, we can adapt and work with that,” said Hardy. “Initially, we’ll try and do what we can with SharePoint outof-the box, but if it gets too complex, we’ll bring in third-party software.”

DocPoint is also not above bringing in other systems integrators to help in areas where it hasn’t developed expertise. “Related to one of our Project Server jobs, there was a requirement for report writing using business intelligence data,” said Hardy. “We don’t have those capabilities in house, so we’ve partnered with another consultancy.”

As DocPoint continues to ramp up its staff, Hardy concluded that the organization is looking at hiring and developing a younger breed of staff. “We are considering one person, for example, who is 25 years old and has been working with SharePoint at a healthcare provider for a couple years,” he said. “We think if we take him and provide the right environment, in a year-and-a-half or so, we’ll be able to place him at a customer site. Hiring younger employees will help us develop our own workforce and grow without having to hire too many contractors.

“One benefit of working for us is that our employees get to work on a variety of SharePoint implementations. In contrast, if they are working for an end user, they might only get to learn one type of SharePoint application.”

Hardy noted that as DocPoint grows, it is starting to be contacted by some experienced SharePoint consultants looking for work. “This is a recent development,” he noted.

DocPoint, which is based in Fulton, MD, currently operates primarily in the Washington, DC, and Baltimore regions, but has done projects in other regions and would like to continue to expand geographically. 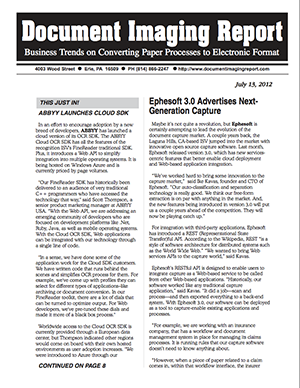