Who will be the next Archivist?

BRIDG (Bimonthly Records and Information Discussion Group) is a public forum to discuss federal records management. BRIDG is hosted by NARA’s Agency Services, composed of the Office of the Chief Records Officer for the U.S. Government, the Federal Records Centers Program, the Office of Government Information Services, the Information and Security Oversight Office, and the National Declassification Center. BRIDG meetings are held every other month and can be joined virtually via YouTube.

Our thoughts and prayers go out to the family of Gordon Everett, Director of NARA’s Federal Records Centers program, who died unexpectedly in late February. He will be missed.

The March BRIDG meeting was particularly noteworthy in that it featured a conversation between Lawrence Brewer, NARA’s Chief Records Officer, and David Ferrierro, who recently announced his retirement as the Archivist of the United States.

[Note: Any errors in the transcription or my curation of the conversation — and the additional items that follow — are entirely mine.]

David Ferrierro: Let me start off by thanking all of you for the work that you do every day to ensure that the records of this country are created, maintained, and delivered to us on schedule. It’s a task that I’m sure you don’t get thanked for every day. It is the most important task in the federal government in terms of preserving our democracy. If there is a silver lining in what we’ve been through in the last two years, it’s that the importance of records has risen to a new public awareness.

Lawrence Brewer: What are you proudest of having achieved in your time as Archivist?

David Ferrierro: We were very fortunate to capture the attention of President Obama and the delivery of the 28 November 2011 presidential memorandum on the importance of good record keeping as the backbone of open government. That really set us up to do some important work, resulting in the OMB directive M-12-18 in August of 2012. M-12-18 laid out the timeline for the shift from paper to electronic record keeping, established the senior agency officer positions for records management, and raised the profile of record keeping across the government by creating and directing the Office of Personnel Management to create the Records Management occupational series. If I’m proudest of anything, it is that I can point to that OMB directive as something truly historic. It was the first time since the Truman administration that the White House got involved to that degree in archives and records.

Lawrence Brewer: What surprised you the most during your tenure as Archivist?

Lawrence Brewer: What was your most enjoyable memory or event from your time as Archivist?

David Ferrierro: There are two kinds of events that immediately come to mind. First, we started doing sleepovers in the Rotunda of the National Archives for kids twice per year. We invited 100 kids and an accompanying adult to stay overnight in the Rotunda, and organized scavenger hunts, movies, readings and things like that. These kids were history nerds and the prospect of sleeping on the floor of the Rotunda in the presence of the Charters of Freedom (the Declaration of Independence, the U.S. Constitution, and the Bill of Rights) was terrific. 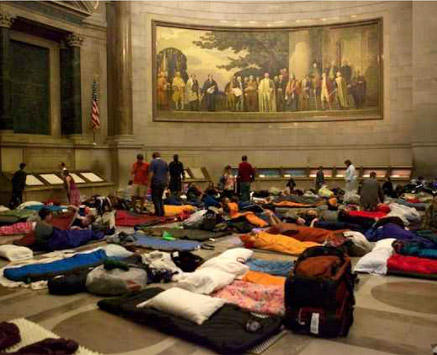 Photos from the National Archives

A second set of events was especially meaningful — naturalization ceremonies we would do twice per year for 75 to 125 new citizens of the United States, again in the Rotunda and in the presence of the Charters.

Lawrence Brewer: What do you think the biggest challenge in records management will be for the next Archivist?

David Ferrierro: I think it’s factoring the impact of the pandemic into the approaching M-19-21 deadlines. The pandemic created significant backlog issues across the executive branch, and delayed some of the information technology infrastructure improvements many agencies planned to make.

Lawrence Brewer: What advice would you give your successor?

David Ferrierro: Spend time getting to know your staff and your constituents. Prior to NARA, I was at MIT for 31 years, and then went to Duke University, then the New Republic for five years. In each of those transitions, I knew some of the issues that needed to be addressed and thought I could make a difference. In coming into an organization, I tried first to get to know the place and its people, and then understand the business side of things. Who uses the services you provide? Who depends on you? What do we look like from a user’s perspective? How can we make it easier for our constituents to do their work?

Re the status of the new digitization standards for permanent records…
“We’ve advanced the standards and the regulations to the point where we have a draft final rule and language that reflects the adjudications of the comments that we’ve received. It will go over to an OIRA (The Office of Regulatory Affairs) at OMB for their review, and then we’ll make a determination based on how substantially the document changes on whether there will be another round of agency review. We’re hopeful to complete the process by the end of the year.” (Lawrence Brewer)

Re the possible extension of the M-19-21 deadlines…
“In terms of the deadlines themselves, as I’ve noted before, NARA can’t independently make those changes on its own; any change requires coordination with OMB. We are doing what we can to convey the feedback that we’re hearing from all of you about how things are going relative to complying with deadlines. We will hopefully have some resolution and some guidance that we can share at some point.” (Lawrence Brewer)

Re the process for requests for extensions of the M-19-21 deadlines…
“We have received a total of nine exceptional requests from agencies. Given how much we’ve talked about exceptions to the deadlines, it seems as though we would probably have hundreds and hundreds of extension requests in the queue that are pending approval. But the reality is that we have a total of nine exception requests that are currently under management review. We want to start reviewing those and making some decisions on those requests, and we have to sort out some of the details in the process. But I expect that we’ll be able to review and get some decisions back to agencies on those nine.” (Lawrence Brewer)

The full recorded 3/31/2022 BRIDG meeting on YouTube is HERE — https://www.youtube.com/watch?v=BnyNIA61CZk

QAI will be sponsoring a seminar on May 24 at the Hamilton in downtown DC on strategies for complying with the M-19-21 deadlines. It’s free to government staff!

Reserve a space today (seating is limited) for: The Clock is Ticking — How to Ensure Agency Compliance with Fast-Approaching M-19-21 Deadlines
https://landing.qualityassociatesinc.com/five-key-takeaways 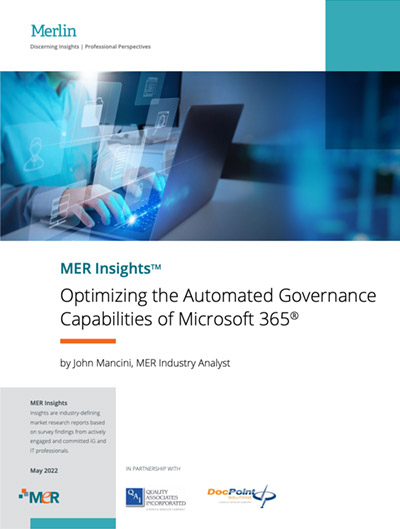